PREGNANT WOMEN AND THEIR PERIODONTAL HEALTH

The medical and dental communities concur that maintaining periodontal health is an important part of a healthy pregnancy. Non-surgical periodontal therapy is safe for pregnant women, and can result in improved periodontal health. The American College of Obstetricians and Gynecologists recently released a statement encouraging pregnant women to sustain their oral health and recommended regular dental cleanings during pregnancy.

Routine brushing and flossing, and seeing a dentist for a comprehensive periodontal evaluation during pregnancy may decrease the chance of adverse pregnancy complications. By maintaining her periodontal health, an expectant mother is not only supporting her overall health, but also helping to ensure a safe pregnancy and a healthy baby.

The best thing a pregnant woman can do for both herself and her baby is to continue regular dental visits. For one 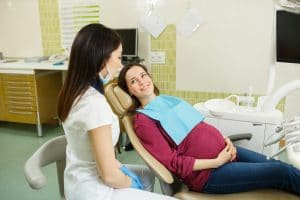 thing, a bacterial infection in the gum could affect the placenta, the organ that links the fetus with the mother’s uterus. There has been some concern over the years about a link between periodontal infection—gum disease—and pre-term, low-birth-weight babies.

Pregnancy is a joyous time. Let your dentist know about your pregnancy at the first opportunity. A woman’s body functions change significantly during pregnancy. Fluctuation in estrogen and progesterone levels and other hormonal changes can affect the body’s response to the bacteria, mentioned above, that cause gum infection. So the need for dental care during pregnancy actually increases. Knowledge of your condition will also affect the decisions the dentist makes regarding the use of certain sedatives, like nitrous oxide, and prescriptions he or she may recommend.

At some point during a nine-month period, you will be due for one of your six-month visits to the dentist. And as your obstetrician or general physician would tell any mother-to-be, the best way to keep an in-utero baby healthy is to keep mom healthy.

PERIODONTAL BACTERIA MAY INTERFERE WITH CONCEPTION

According to a new study, a common periodontal pathogen may delay conception in young women. This finding is novel: previous studies have shown that periodontal diseases may be a risk for general health, but no data on the influence of periodontal bacteria on conception or becoming pregnant have been available. 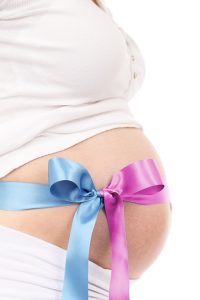 256 healthy non-pregnant women (mean age 29.2 years, range 19 to 42) who had discontinued contraception in order to become pregnant were followed to establish whether they did or did not become pregnant during the observation period of 12 months.

Porphyromonas gingivalis, a bacterium associated with periodontal diseases, was significantly more frequently detected in the saliva among women who did not become pregnant during the one-year follow-up period than among those who did. The levels of salivary and serum antibodies against this pathogen were also significantly higher in women who did not become pregnant.

Statistical analysis showed that the finding was independent of other risk factors contributing to conception, such as age, current smoking, socioeconomic status, bacterial vaginosis, previous deliveries, or clinical periodontal disease.

Women who had P. gingivalis in the saliva and higher saliva or serum antibody concentrations against this bacterium had a 3-fold hazard for not becoming pregnant compared to their counterparts. Increased hazard was nearly to 4-fold if more than one of these qualities and clinical signs of periodontitis were present.

Expectant Mothers’ Periodontal Health Vital To Health of Her Baby 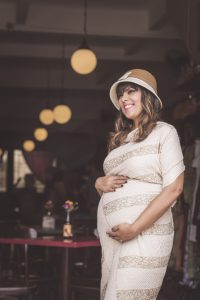 When a woman becomes pregnant, she knows it is important to maintain a healthy lifestyle to ensure both her own health and the health of her baby. It is important for pregnant women to maintain periodontal health as well. Research has indicated that women with periodontal disease may be at risk of giving birth to a pre-term or low-birth weight baby.  According to the Center for Disease Control and Prevention (CDC), babies with a birth weight of less than 5.5 pounds may be at risk of long-term health problems such as delayed motor skills, social growth, or learning disabilities. Other issues associated with pre-term birth include respiratory problems, vision and hearing loss, or feeding and digestive problems.

Periodontal disease attacks the gum tissue and in more severe cases, the bone supporting the teeth. If left untreated, periodontal disease, also known as gum disease, can lead to tooth loss and has been associated with other systemic diseases, such as diabetes and cardiovascular disease.

Tenderness, redness, or swollen gums are a few indications of periodontal disease. Other symptoms include gums that bleed with toothbrushing or eating, gums that are pulling away from the teeth, bad breath, and loose teeth. These signs, especially during pregnancy, should not be ignored. They require treatment from a dental professional.

The medical and dental communities concur that maintaining periodontal health is an important part of a healthy pregnancy.

If you, your family or friends need dental care, Drs. Hoover and Yanda would be honored to provide you with state-of-the-art dental care in our modern dental practice.  Refer someone you love to someone you trust!